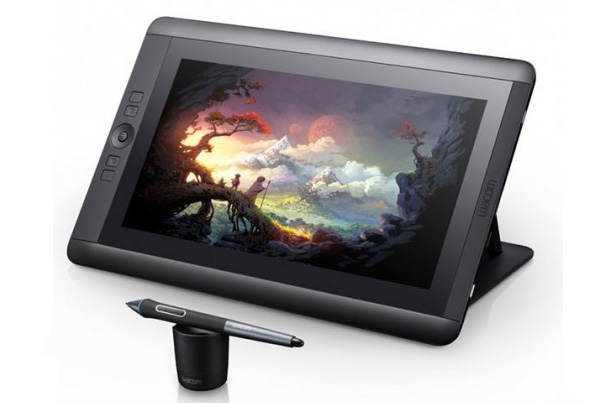 When Griffin Technology announced the radioSHARK USB AM/FM radio earlier this year, many people were anxious to get their hands on one. After a long delay, it was finally ready for primetime. We had the chance to try one out, and overall, we’d have to agree.

Of course, things like XM and Sirius are the new buzzwords in radio, but AM and FM radio still have a large following. After all, they’re free, and there’s a lot of choices in most areas. The radioSHARK allows users to take their favorite local radio broadcasts, listen to them on their Mac, save them for later, or put them on their iPod. The radioSHARK is a white plastic fin-shaped peripheral with blue LED “gills” to indicate power. They turn red when recording. A sturdy chrome base finishes off the excellent aesthetics.

Setup is relatively simple. After installing the software, the radioSHARK can be plugged into any free USB port.

The software is relatively plain, but functional. The brushed metal look is not the same as Apple’s, but something new, like Griffin’s Final Vinyl software. The interface itself looks a lot like any digital radio. 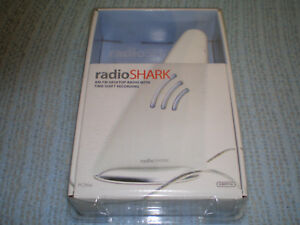 The Band button changes from FM to AM and back again. The Seek button looks across the spectrum for a strong station. The Rec button toggles recording for what you are listening to. Sched lets you create a scheduled recording, similar to the timer on many VCRs. EQ allows the adjustment of the graphic equalizer (the annoying car present is a nice touch). TS is the final button, and pulls-down the Time-Shift recording drawer.

Presets can be added once a station is tuned. Simply pick “Add preset” from the pull-down menu and give your preset station a name (if you want a special name), otherwise the frequency will only be listed.

Scheduled recording is a simple task. After pressing the Sched button, one must simply pick the preset station to record from, the start and stop dates and times.

Time-Shift recording allows the replaying of live radio. Think of it as a caching or instant replay of whatever you are listening to. When enabled through the software’s preferences, Time-Shift saves the last :30 (or another amount) of audio on the hard drive for later retrieval.

Recording is either in AAC or AIFF format on the Mac, which enables you to transfer the files to many other audio programs. The Windows version records in WAV format. The radioSHARK software will export files directly into an iTunes playlist, if desired.

With the software being the main focus, the hardware is also important. The radioSHARK itself can be positioned to get the best reception. We found that coiling the included USB extension cable, as well as moving the radioSHARK away from our computer monstrosity improves reception.

A small jack on the back of the radioSHARK serves as dual duty for both earphones (the radioSHARK still provides audio to the jack when the computer is in sleep mode) and an external antenna (we didn’t have any to try).

Overall, the radioSHARK is an excellent product for anyone who listens to a lot of local radio programs and wants to put them on their computer or iPod. Obviously, the $70 price tag is not for everyone, but for those who will use the extra features of the software will find it worth the money.

The radioSHARK provides TiVo-like features for AM/FM radio listeners, and does a good job at it.

Pros: TiVo-like features for radio, audio can be transferred to iPod, excellent-designed hardware.

Cons: Software somewhat lame, and not as polished, but updates have improved it, reception lacking on some stations

This post has been filed in Reviews and Speakers/Audio